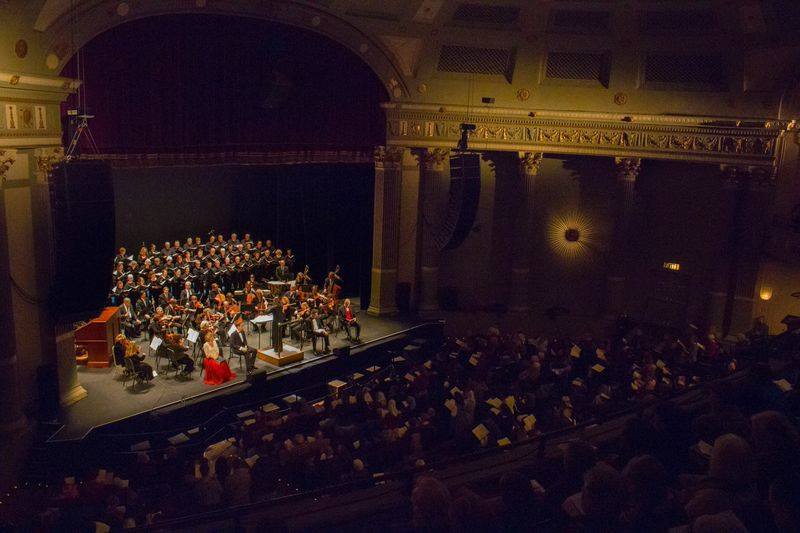 Cappella Festiva was founded in 1974 by Jameson Marvin, then Director of Choral music at Vassar College, and Robert Lewis (an instrumentalist with the Hudson Valley Philharmonic) as “Cappella Festiva Chamber Choir and Orchestra” with the explicit purpose of performing the music of Johann Sebastian Bach.

When Mr. Marvin left the group in 1978 to take a position at Harvard University, Mr. Luis Garcia-Renart, distinguished cellist and teacher at Bard and Vassar Colleges, was appointed Musical Director. Garcia-Renart was born in Barcelona,
Spain. He studied 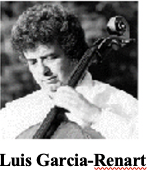 extensively in Europe and Mexico. He studied directly under Pablo Casals in France and Puerto Rico from 1956 to 1960. In 1960 he won a scholarship to study at the Conservatory in Moscow with Rostropovich and Khachaturian. He has performed as a soloist in Europe, the Soviet Union, Israel and North and South America. Locally, from 1965 to 1980, he was principal cellist of the Hudson Valley Philharmonic, and has also acted as its music director and associate conductor.

Cappella Festiva enjoyed a long period of growth under the direction of Mr. Garcia-Renart and the group’s repertoire expanded from an emphasis on Bach to include a wide range of music including Baroque, early Classical, Romantic and Modern. The chorus built up a loyal following in the Poughkeepsie area, and also performed in Millbrook, Kingston, Rockland County and Connecticut. Many winter concerts were performed in collaboration with the Bard Chorus. Bach’s choral works continued to be a mainstay for the organization, and Cappella organized a 25th anniversary celebration in the 1997/1998 and 1998/1999 seasons with four all-Bach concerts, culminating in a presentation of Bach’s Mass in B Minor in the Spring of 1999 at Skinner Hall, Vassar College. Mr. Garcia-Renart retired at the end of the 1999/2000 season.

Beginning in the early 1990’s Cappella Festiva was honored with an offer to sing, along with other local choruses, with the Hudson Valley Philharmonic. These choral performances continued for several years, with presentations of Beethovens Choral Symphony Number 9, Mendelssohns Elijah, Mozarts Requiem Mass, and Mendelsohns Incidental Music to a Midsummer Nights Dream (2002, women only).

The 2000/2001 season was a year of auditions, with four finalists chosen to present concerts. In the summer of 2001, Cappella invited Dr. James Bagwell to be the Music Director of the choir. Dr. Bagwell moved to the Hudson Valley in the fall of 2000 to assume a position at Bard. He holds a doctorate in choral conducting from Indiana University, with a minor in Music Literature and History of Twentieth Century Cultural Studies.


The 2000/2001 season was a year of auditions, with four finalists chosen to present concerts. In the summer of 2001, Cappella invited Dr. James Bagwell to be the Music Director of the choir. Dr. Bagwell moved to the Hudson Valley in the fall of 2000 to assume a position at Bard. He holds a doctorate in choral conducting from Indiana University, with a minor in Music Literature and History of Twentieth Century Cultural Studies.

Prior to coming to Bard, Dr. Bagwell was the Artistic Director and Conductor of the Indianapolis Symphonic Choir and Director of the internationally renowned May Festival Youth Chorus in Cincinnati, a position he continues to hold. While in Indianapolis, he founded a professional ensemble of Chamber Singers, who received critical acclaim for their performances and innovative programming. He has trained choruses for a number of major American orchestras, performed as guest conductor for Light Opera of Oklahoma and the Indianapolis Chamber Orchestra. He has also served as an opera coach and prepared numerous opera choruses for Indiana University Opera Theater. From 1988-1990, Dr. Bagwell was a member of the Robert Shaw Festival Singers in Europe and New York. 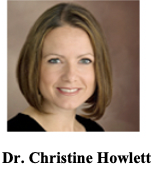 Our more recent past has been full of music, education, and growth for Cappella Festiva. Dr. Christine Howlett was named artistic director in January 2006. Canadian conductor and soprano Dr. Howlett is Associate Professor of Music, Director of Choral Activities at Vassar College where she conducts the Vassar College Women's Chorus and Mixed Choir and teaches music theory and voice.  She is in her sixteenth year as Artistic Director of Cappella Festiva and serves as conductor of the Cappella Festiva Chamber Choir. Dr. Howlett studied Vocal Performance at the University of Toronto and
earned a Master's Degree in Early Music Voice Performance and a Doctorate of Musical Arts in Choral Conducting from Indiana University.

6, Christine Howlett and conductor Susan Bialek,  pioneered the successful “Summer Choral Festival” at Vassar College and the Cappella Festiva Treble Choir for youth ages 10 to 17. In the spring of 2017, Cappella gave birth to a new choir for younger children open to 2nd through 5th graders, known as Cor Capriccio and led by early childhood music specialist Elizabeth Clifton.

Membership in Cappella Festiva Chamber and Treble Choirs is by audition, with members drawn from the mid-Hudson Valley. Many of the singers in Cappella are trained vocalists and have fine solo voices. Some maintain an active avocation of solo performances. Thus, one unique aspect of the group is that solos are generally taken by members of the group itself, supporting the conviction that the best music can be made with people who are used to working with each other.